This History of Neon Engine Interactive

Note: At the moment, the game is not being sold on any platform and will remain so until we've completed all of our intended comfort tweaks to ensure players' first experiences are as comfortable as we can make them. See below for additional information regarding Hyperwheel Overdrive's release status.

“ Our mission is to drive virtual reality forward with great games that offer novel experiences. ”

The World of Hyperwheel Overdrive

The year is 2197. Humanity experienced a major collapse in the middle of the 21st century resulting in economic crises, food shortages, and a return to very small communities along with an ever-present feeling of strong distrust that extended for many decades. By 2156, civilization began to rapidly emerge from the New Dark Age, thanks in large part to the invention of an energy field generating technology that can bind physical objects through fields and apply powerful forces. This led to a nearly endless supply of energy at a very low cost. It also gave rise to the design of the hyperwheel car, a new type of vehicle that makes use of the hyperwheel / hyperaxle system which allows for a two-wheeled gyro-stabilized car that can accelerate very quickly. It also provides an energy field-based suspension system that dampens even the most extreme impacts. The suspension system is assisted by an incredible G-Suit that is able to heavily reduce the G forces experienced by the driver substantially.

In 2169, a new sport had arrived that pitted hyperwheel drivers against each other in combat and weaponized racing. Though many competitors pilot their cars via virtual reality and robotic humanoids, there are some that prefer to pilot directly and put their lives on the line for the sport they love. Because the current era is characterized by a strong belief in the necessity of freedom and self determination, most people have little issue with such a thing and are often inspired by the bravery and dedication shown by the "physicals", a term ascribed to the drivers that bravely drive their hyperwheel cars directly. It also helps that, most of the time, the damage is not lethal due to a combination of strong armor provided by the G-Suit and the highly advanced medical technology that now exists.

In the past few decades, Hyperwheel Prime League has become a notable part of human culture. Are you ready to show the world what you can do between those two massive wheels? Start your hyperaxles, grab your laser rifle, and welcome to HYPERWHEEL OVERDRIVE! 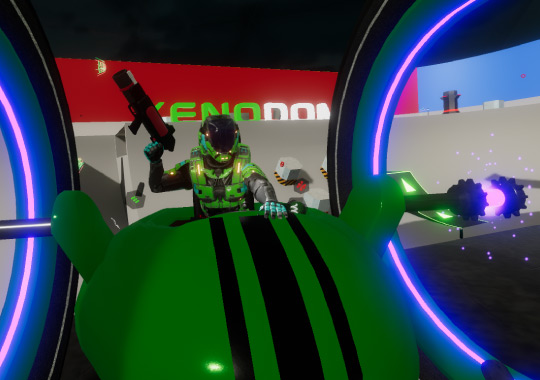 Pilot a hyperwheel car, 2197's most versatile sport combat vehicle. Race or battle against other drivers in VR, or perform big stunts on the massive quarterpipes of the Xenodome. Take advantage of a large assortment of power-ups, as well as your laser rifle & dedicated launcher, to alter the situation in your favor. Use a plane kit to soar over the daunting HyperCorp Complex, or a boat kit to navigate the long shores of Volcanica Island!

As you play, you'll collect race and challenge trophies, as well as golden rings hidden (or otherwise difficult to reach) throughout the game's 5 stages. These are used to unlock additional game content as you become a more experienced hyperwheeler. Unlock new car decals and driver suit skins, as well as additional stages and race tracks.

Hyperwheel Overdrive will be available to new players again on Steam, and will also be available on the Oculus store soon. The best information we have at the moment is that it will be out again September 2020, but we haven't yet nailed down an exact date yet.

At this time, Hyperwheel Overdrive supports the Oculus Rift, Valve Index, and HTC Vive headsets and we are still working on verifying that everything works property in Windows Mixed Reality headsets.